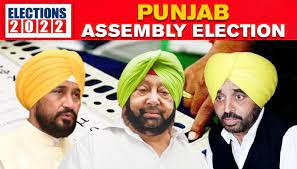 Punjab, Punjab 2022 Election: There are 1304 candidates in the fray for the 117 seats in the Punjab Legislative Assembly. The final list of candidates has been released by the Election Commission. In this, maximum number of 19-19 candidates are in Sahnewal and Patiala rural areas of Ludhiana district. At the same time, the least 5 candidates are from Dinanagar. Where Congress minister Aruna Chaudhary is in the fray.

Punjab Chief Electoral Officer Dr. Karuna Raju said that he had received 2,266 nominations. During their scrutiny, 588 nominations were canceled. After this, out of the remaining 1645, 341 candidates withdrew their nominations. After this 1304 candidates are left. Polling in Punjab will be held on February 20. Counting of votes will take place on March 10. 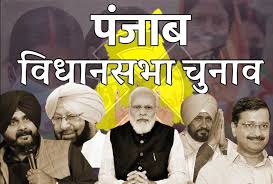 Punjab 2022 Election As the date of polling in Punjab nears, the electoral battle between political parties is intensifying. The atmosphere of publicity and poster war on social media has been heating up among all the parties. Where leaders are putting out small clips on the digital platform by taking out each other’s shortcomings, as well as posting posters using graphics with memes and photos.

For the first time in the politics of the state, the BJP, which entered the electoral riot on its own, is considered to be at the forefront of campaigning on social media in the country. Although there is no such momentum in Punjab, but the party has started targeting the opponents. In this digital war, the BJP has targeted the Aam Aadmi Party and not against the state government. Most of the BJP’s posters and small clips on digital platforms are seen only of Arvind Kejriwal and Aam Aadmi Party. Channi and Sidhu are seen in only a few posters of the party.

The Aam Aadmi Party has directly targeted the Channi government of Punjab. On the other hand, talking about the Congress, instead of doing evil to others, the party is only counting its achievements on social media. There are only a few posters of the party where opposition to the BJP is visible. Most of the posters cover the work done by Channi Sarkar in 111 days. 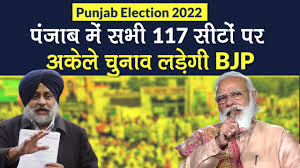 Liquor contracts will remain in Punjab for 48 hours: There will be no sale from February 18 to 20 at 6 pm, March 10 will also be a dry day

Punjab 2022 Election Liquor contracts will be closed for 48 hours in Punjab for the assembly elections. There will be a ban on the sale of liquor in Punjab from 6 pm on February 18 to February 20 at 6 pm. Polling in Punjab is to be held on February 20. That’s why these orders have been given. Apart from this, counting of votes is to be held in Punjab on March 10. That day was also a dry day. Punjab Chief Electoral Officer Dr. Karuna Raju has written a letter to the Home Department and Excise Secretary in this regard, asking them to strictly implement the order.

Neighboring state contracts will also not open on the border

Punjab 2022 Election During this, this order of the Election Commission will also be applicable to open contracts on the border of states adjoining Punjab. Punjab is bordered by Jammu and Kashmir, Haryana, Rajasthan, Himachal Pradesh and the Union Territory of Chandigarh. Here too, there will be a dry day during this period.

Punjab 2022 Election So far 30.23 lakh liters of liquor worth Rs 16.50 crore has been seized by the enforcement teams of the Election Commission in Punjab. Apart from this, drugs worth Rs 279.17 crore have also been caught. Narcotics Control Bureau (NCB) teams have been deployed in every district by the Election Commission to catch drugs. Apart from this, Punjab Police is also trying to stop drug abuse with the help of police and drug inspectors of neighboring states.

Rbi Digital Currency, digital currency, RBI, crypto technologies: In the new monetary year beginning from April, you won’t have to go to the market with paper notes in your tote for shopping. The public authority  has declared the send off of its computerized cash, ie Digital Rupee, in the monetary year 2022-23. At the same time, income from cryptocurrencies in India will now be taxed. Finance Minister Nirmala Sitharaman gave this information in her budget speech on Tuesday.

Government digital currency will give a big boost to the economy

Finance Minister Sitharaman said that the Reserve Bank of India (RBI) has made all preparations to launch dgtl crncy. This dgtl crncy will also be based on blockchain and other crypto technologies, like bitcoin and other types of cryptocurrencies operating around the world. Finance Minister Sitharaman said that after the introduction of central bank dgtl crncy, the currency management system will become very easy and cheap. This is likely to give a big boost to the economy of the country. Along with this, the digitization of the economy will also get accelerated.

It is an electronic form of cash. Just like you do cash transactions, you will also be able to do dgtl crncy transactions. CBDCs work somewhat like cryptocurrencies (like bitcoin or ether). With this, the transaction is done without any intermediary or bank. You will get the dgtl crncy from the Reserve Bank and it will reach to whomever you pay or transfer. Will neither go to any wallet nor to bank account. Will work exactly like cash, but will be digital.

How is this Digital Rupee different from Digital Payment?

How will this digital rupee be different from cryptocurrencies like bitcoin?

Has any country launched a digital currency till now?

Why has the interest of central banks around the world in digital currency increased?

These are 4 big advantages of digital currency-

What is the work done by RBI on digital currency in India?

“The unveiling of the digital rupee demonstrates the Indian government’s acceptance of blockchain technology. While the fate of private cryptocurrencies is unknown. The digital rupee released by the RBI will usher in a new era in currency governance. It is in line with other countries such as China and England. According to Amit Agarwal, partner at Nangia Andersen, more details on how this will work are about to appear in F22-23.

Developed economies, including the United States and China, have begun to expand Central Bank Digital Currency (CBDCs) to facilitate digital currency adoption. The CBDC for the Bahamas has already launched.

The Reserve Bank of India plans to introduce a digital rupee based on blockchain technology in the fiscal year 2022-2023. According to Finance Minister Nirmala Sitharaman, who presented the Union Budget on Tuesday. The Reserve Bank of India plans to employ blockchain technology to launch a digital currency known as the Central Bank Digital Currency (CBDC). The introduction of a central bank digital money will give the digital economy a significant boost. In addition, the digital money will result in a more efficient and cost-effective currency management system. The Reserve Bank of India is thus proposing to develop a digital rupee utilizing blockchain and other technologies beginning in 2022-2023,” Sitharaman stated in her Budget address.

A central bank has been evaluating the safety and effectiveness of the digital rupee since its announcement. In December, T Rabi Sankar, RBI’s deputy governor, stated that the central bank plans to establish two types of CBDC: a wholesale account-based one and a retail one. “While the wholesale account-based CBDC has made significant progress, the retail CBDC is more sophisticated and will take longer. As per Sanskar, the RBI will issue digital currencies for a pilot based on which is ready first.

Read More…..Click thise link Rbi Digital Currency| RBI to launch its own digital currency this year| Earnings from cryptocurrencies will have to pay 30% tax